Risk Update: NFP – Are you ready?

Nonfarm Friday is a day that used to be quite exciting for trading desks and traders alike, although the last couple years have been somewhat sleepy. After hovering in a tight range for an extended period of time, US Nonfarm Payroll figures dropped by 700,000 in the April release. 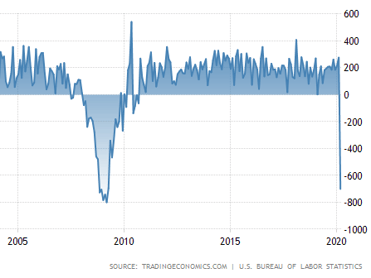 This has been the first decline since September 2010 and is close to the numbers seen during the 2009 financial crisis. While the 700k figure is massive, it will almost assuredly pale in comparison to the figures that will be released this coming Friday.

Last month’s payroll report only captured the beginning of Covid-19’s impact on the economy and estimates for Friday’s release exceed 20 million jobs lost and unemployment jumping north of 15%. If this is the case, it would represent by far the largest one month drop on record.

With Wednesday’s ADP private payroll figures  in line with the nonfarm estimates, coming in at an unprecedented loss of 20.2 million jobs, this is looking increasingly likely.

Certain markets seem somewhat numb to the unprecedented figures, which is a signal a that V shaped recovery is expected but whilst the optimism is certainly nice to see, the grim reality is that the current pandemic, no matter the outcome, will leave a scar on the economy.

The muted reaction to last month’s NFP cannot go on forever and trading desks need to be prepared for the reaction to the release on Friday.

Important risks a trading desk need to consider are as follows:

This is not meant to be a doom and gloom scare piece for trading desks. There is just no better time than the present to make sure trading desks have full control of the risks created by the current environment as there is likely to be some fireworks at 8:30am EST on Friday.

IS Risk Analytics’ View From the Desk – October 2022

October results varied across the board as volumes fell over 15% from September and range [...]

This article was written by Jeff Wilkins, Managing Director of IS Risk, part of ISAM [...]

IS Risk Analytics’ View From the Desk – September 2022

September got off to a slow start with low volumes and profitability in the first [...]

FNG Exclusive Interview… A lot has changed since we last caught up with Jeff Wilkins of [...]

In spite of tepid volumes in July (which are often seen mid-summer), revenues returned to [...]

June results saw profits dipping slightly from May on roughly the same level of volume. [...]

Trading volumes dipped slightly from April to May but revenues were hit harder as overall [...]

IS Risk Analytics View From the Desk – April 2022

April profits were down from March’s strong numbers but were still in line with historical [...]

IS Risk Analytics’ View From the Desk – March 2022

Market volatility driven by the war in Ukraine drove volumes and profits in March to [...]

IS Risk Analytics’ View From the Desk – February 2022

Volumes in February were only slightly down from 2021 averages, but profits were relatively modest [...]